This will be the first year that I will be dedicated to my puppets.  Previously I always worked along with my puppet building.  Scary… although I am excited as well.

I spend much more time looking for shows that I want to do and booking them than I ever have before.  I am also doing many more shows.  I did a show in January that I thought would be good for me.  It turns out that was a bust.  So I am still learning what shows to do and which ones are just not for me.

I have had a steady stream of custom orders lately.  That has been wonderful and amazing.  I love taking someone’s ideas and putting them into puppet form.  Truly one of the best parts of my job.

So I am working right along…. booking shows, doing custom work, and building puppets everyday!

Black t – shirts with glow in the dark lettering! Comes in ladies cut and unisex.  I am so excited! Send me an email if you want to order yours.  For a limited time I will be offering free shipping!  Each shirt is $15.00.  I will also have them available at the next two shows I will be at.  Rockford HS Craft show on November 8th and The Grand Rapids Comic Con on November 21-23. 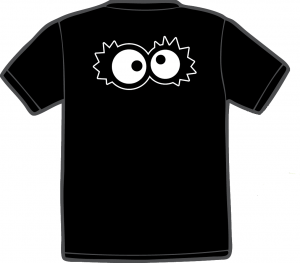 Spent my weekend at a gaming and comic convention here in Grand Rapids called GrandCon.  I wasn’t sure how I would be received as I have never done a show like this one.  It turned out to be a good weekend.  Marc Specter was incredible nice and made sure I felt welcome.  He was nice enough to come and ask me how the weekend went as we neared the end of the third day.  It was great that I had such a positive response to the puppets.  I did good.   I would totally do it again.

I met some fantastic people and got to see a few friends I have made in the comic community.  It was really great to see Jim McClain again.  He was such a great person to work with.  I made several puppets for him.  He even had his Radical puppet with him!  I made a few more friends and look forward to seeing them again in future shows!

As I navigate the world of comic conventions I learn something new each show.  I am convinced that this is the place for me and my puppets.  Everyone really likes and admires my puppets.  One thing I don’t get however is how people come and pitch their great ideas to me, or ask me for my patterns and details of how much money I make… yes this actually happened.  What???  I don’t understand that at all.  I tried to be nice, and evasive because really I am not giving out my patterns or my profit margin information to anyone.  If I did, then I might see him at the next show selling puppets that are my original designs.

I had a moment of totally dorkdome… I am not well versed in the world of comic… and I totally should be.  I had a guy come by and purchase a spiderman puppet.  I had no idea who he was, however thanks to my table neighbors they clued me in.  It was Ryan Stegman.  He bought the puppet for his son.  I felt like an idiot that I had no idea who he was.  He was super nice and even let me take his picture.  So now I totally geeked out and was on cloud nine.  That was a super cool moment, even if I was a dork!

Overall I have to say this was a positive experience.  Now onto the next show! 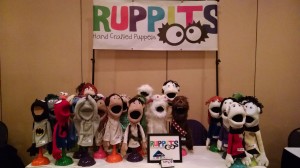 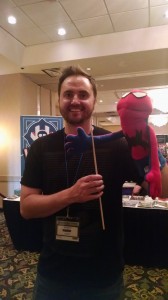