When amazing things happen in life, you tend to remember every detail about that moment.  For me, that moment was when I finished Harry Potter and the Sorcerer’s Stone for the first time.  I was on the playground at school and had decided to take my book out with me and I hadn’t realized how few pages I had left.  It was warm, I easily had drowned out the sounds of everyone playing so I could focus my book.  I flew through the end of the book and went right inside to go to the library.  And that was it.  I was obsessed.

And now my obsession gets to live itself out in the form of a Ruppit!  We are now working on EIGHT new Harry Potter themed puppet designs.  I’m totally geeking out about it while we cut patterns.  Picking the puppet design wasn’t easy, as the list of characters in Harry Potter is extensive.  However, Rebecca did it!  We stuck with the Golden Trio; Harry, Ron, and Hermione.  We decided to only do three human based characters as they are more difficult to create than creature based characters.  SO! Of the eight designs we chose, five of them were creature based! 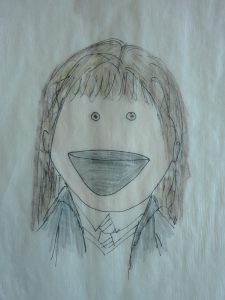 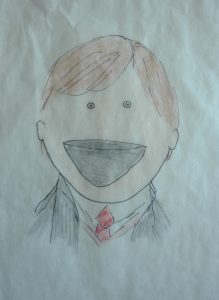 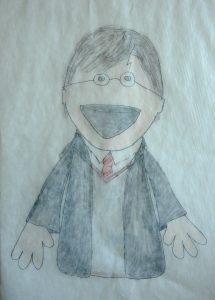 The quickest Ruppit was a Pygmy Puff!  Pygmy Puffs are cute, little, fluff balls of fur.  J.K. Rowling introduced us to their adorableness when Ginny Weasley bought one from her brothers’ joke shop and named him Arnold.  We made it a simple puppet of Rebecca’s own design, which she called a Pocket Puppet! It has a pocket that you slide your hand into. 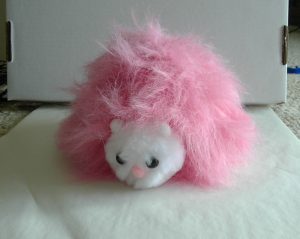 Next, we decided to design a Cornish Pixie.  These were introduced in the Chamber of Secrets when Gilderoy Lockhart released a cage full of the small, blue, winged creatures in his Defense Against the Dark Arts class.  These puppets will be a hand-rod puppet, which is what we normally do here at Ruppits. 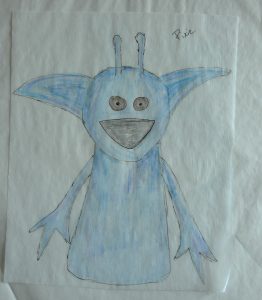 Dobby was our next design! He also was introduced in the Chamber of Secrets when he tried to warn Harry not to return to Hogwarts.  He is a house elf, so he wears a smock resembling a pillowcase.  He will be a hand-rod puppet as well. 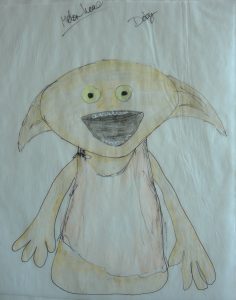 Next, we designed a Mandrake!  Also introduced in the Chamber of Secrets, (that was a good movie for creatures, I guess!).  These creatures are the root of a plant that looks likes a human.  When they are fully grown, their screams are fatal to anyone who hears it.  These puppets will be hand rod puppets as well. 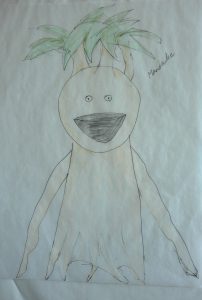 Finally, we took some inspiration from the latest Wizarding World installment, Fantastic Beasts and Where to Find Them.  The Demiguise will be another hand-rod puppet we will feature at Ruppits! The Demiguise is a creature that can make itself invisible and can tell the near future.  Newt Scamander had his own Demiguise named Dougal. 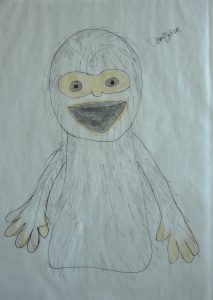 We are SO excited to be releasing these Ruppits to you all!  If you are in Grand Rapids area, we are looking to taking part in the Harry Potter in the Park in Sparta coming in August!

Let us know how big of a Harry Potter fan you are and what you think of our designs!

It’s been a while since we’ve posted last, but we have so many new exciting things to tell you!  We have been hard at work on some new Ruppit designs, going to lots of shows, and posting more on our social media accounts.

We have some show dates coming up soon, so if you’re curious about cons, come out and see us!

We have one show coming up this month at Midwest Media Expo. in Dearborn on April 28th through the 30th.  Lots of fun guests will be there alongside us!  Musical guests Arc Impulse will be headlining with their rendition of music from your favorite childhood video games!  mc chris will also be performing his original raps that focus on your favorite nerd subjects such as Harry Potter and Star Wars!  Voice actor Billy West will be speaking, along with many other talented people! We will be in the Dealers section at Midwest so you can come by and say hi and maybe pick up a Ruppit of your own!  This link will take you to the Midwest Media Expo website so you can check it out!
Motor City ComicCon will be next month, May 19th through the 21st.   This con is massive and has a lot of neat guests, and they are still updating the media guest list!!  Cosplay contests, cool panels, and of course, us!!! I’ll link you to that website as well so you can see the multitudes of events they will be hosting!

GrandCon will be at the Grand Rapids DeVos Place on September 15th through the 17th.  This is a table top gaming convention where they host competitions for games like Monopoly all the way to Dungeons and Dragons.  Super interesting and we love going!  You can meet designers, other players, and maybe even learn to make a game yourself!  Check out their website!
Grand Rapids ComicCom will be in October on the 20th through the 22nd.  This con is also at the DeVos Place, but will be much bigger than GrandCon!  Lots of fun stuff to do and see and we love being at our hometown Con! We really hope to see you there! Pick up tickets and other information at their website!

We’ve also updated our store, which is on our Facebook page! We just finished a customized puppet for a giveaway so make sure to check that out.  We also do customized orders regularly.  We also have been working posting on our Instagram and Twitter pages!  Find those links below!

Have a wonderful day!

I am absolutely excited by how many custom orders I have been receiving lately.  It is so much fun to work on these orders.  I am doing puppets that I don’t normally do and that is always challenging and fun.  So thank you if you have ordered from me!  I really appreciate it!